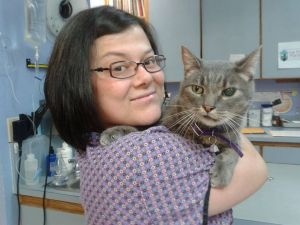 Simba came to us in 2007 after being hit by a car, and suffering a fractured eye socket and broken jaw.  The most common question asked about Simba is "Does he have a glass eye?"   The answer is no, that is his real eye.  Nerve damage from his car accident has caused loss of function in that eye.  But as Anika likes to tell people, "Don't worry, he wasn't driving."

Simba's favorite activities include sleeping on his cat tree, supervising the receptionist desk, checking for monsters in the bathroom and mooching treats from the staff. 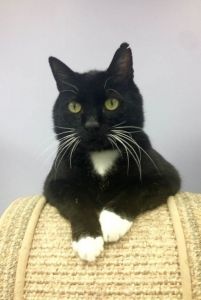 Mouzer became our clinic cat in 2015.  He is a very sweet boy and oversees all the meal preparation in The Catnip Suites.  He is on some long term medications and prescription food for lower urinary tract disease.  Mouzer would love a home of his own and someone who can manage his special needs.  He is not particularly fond of other cats but it may depend on the other cat.  If you are interested in adopting or fostering Mouzer please speak to a staff member or send us an email. 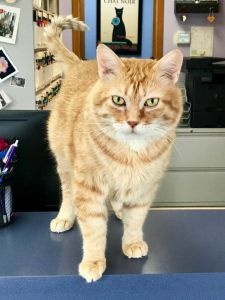 Marmalade is Dr. Rosie's cat, (so quit asking if you can adopt him).  He used to live with her but wouldn't stop terrorizing her other cats so he became her coworker.  Marmalade excels at client relations and loves everyone.  He might even give you a private viewing of his amazing tummy.  Unless he is napping, in which case, you'll have to come back later.  Marmalade is quite serious about naps.